Confession: I’m a bit of a Dungeons & Dragons nerd. I spent most of my teenage years with my nose in a sourcebook or a Dragonlance novel. Six novels in particular. The Legends trilogy is my favorite. Hands down. But it was the first trilogy, Chronicles, is where I first read about Otik’s Spiced Potatoes. Anyway, I’ve looked for recipes for these potatoes over the years and have found a few. I’ve even liked most of them. But I thought it was time for me to try my own.

I had these potatoes tonight with a ribeye steak. Tomorrow morning I think I’m having a steak omelet and fried potatoes for breakfast. Just as I might if I were staying at the Inn of the Last Home somewhere in Abanasinia. I wish I’d also had some mushrooms to go along with it. Either way, here is my take on Otik’s Spiced Potatoes. I figure if people are eating these alongside such ravenous people as Caramon Majere (who had a taste for the pungent Dwarf Spirits) then these potatoes have to be bold. At any rate, I hope more than gully dwarves will enjoy them.

Here is a link to several other versions of these classic Spiced Potatoes by Otik. 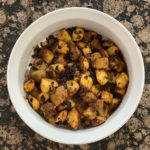 Higgy began playing RPGs around 1994 when his brother introduced him to AD&D and Cyberpunk 2020. Raised on a steady diet of jalapeños, MTV, 80s action, sci-fi, and horror movies, his gut has been wrenching for nearly 40 years. He lives in North Georgia with his family and way too many books.

You’re lookin’ for God—I mean literally, not some soul-searchin’ bullshit—where the hell’re you supposed to start? Jerusalem? Rome? Top of a mountain? Billy Graham?

— Garth Ennis, Preacher: Gone to Texas
Searching is in progress